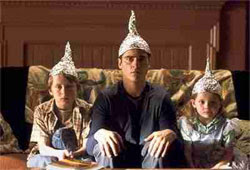 Is it time to break out the tin foil hats? Or should we be at least a tad concerned about the lack of public consultation?

For those on the ‘far side of crazy” this is just one more instrument being added (like the widely believed Nafta Super Highway) in the orchestration of the “New World Order” conducted by, well, the Bilderberg Group, or the Clube do 1001, the Illuminati, the Free Masons, the House of Windsor or, well, fill in your favorite global villain and secret society >-------HERE--------<.

Still, nutters aside, there is something a wee unnerving with Generals and Canadian Commanders signing a military Pac (called the Civil Assistance Plan) between two Nations without a least a discussion from politicians on either side of the boarder. Here’s the story and website that got me interested, but I found it here on a Canadian Government site, too.

Prior to the signing of NAFTA in 1994, if you´ll remember, some politicians and most unions went ballistic over the movement of commodities across boarders without restrictions, but now there appears to be ZERO interest in tanks, soldiers and the most sophisticated weaponry known to man doing the same? [shudder]

The lack of debate (did anyone here about this?) may all be part of the continued lionization of our Military as of late, following the US lead. It’s a brash but effective way of manipulating the sentiments of the public. Wars maybe illegal, occupations maybe immoral, signing a military Pac with another nation without discussion from Parliament maybe undemocratic, and what was once a hunt for a terrorist has turned into a nation building failure without end, but you better not question any of it because then you wouldn’t be "supporting our troops” and hence, “you’re not a patriot”. End of debate.

With such a stong emotional phenomenon like this why even try to debate?

Well, although I don´t fall easily as prey to conspiracy theories and I don´t think that is all part of some sinister global plot as some inevitably will, I did feel it was worth mentioning that Canada has a rather increasinlgy unhealthy love for its military fed by a rather annouyingly secretive Tory Government. There´s nothing wrong with respecting those whose job it is to "project the nation", just like I repsect the police, firemen, Doctors, scientists and environmentalists that work to protect the planet, but to give them unfettered and unrestricted licence to do as they please, in secrecy, and based on blind nationalistic emotion is just plain wrong and potentially very dangerous. If you look to the history of much of the world, especially in Latin America, Nation’s where armies were given carte blanche and allowed to accrue power and pen bilateral and multilateral deals sans public consultation usual don’t stop there. And yes, as history has also proven time and time again in these instances, like what the Civil Assistance Plan purports, it’s always done with your best interest at heart.

Muuuhoooohaaaaahaaaaaa. Happy Thursday.
Posted by Todd at 4:15 AM No comments:

Government sends in the army

It can get pretty nasty there, now the governmentis sending in the trooops. From the BBC:

"Some 160 Brazilian troops have been sent to the Amazon to join hundreds of police officers involved in efforts to tackle illegal deforestation.

The move follows clashes last week when local people and sawmill workers forced environmental officials out of the town of Tailandia in the state of Para."

More here from the BBC
Posted by Todd at 3:47 AM No comments: 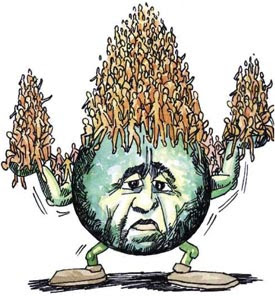 True, there is a great deal of concern over the carry capacity of this planet and the obvious statistical fact that while we’ve added 3 billion people to the planet over the last 50 years, we’ve also drained, chopped, poisoned and decimated an incalculable amount of “non renewable” resources. That’s NON RENEWABLE just for emphasis. Still, I don’t know how by pointing out the obvious suddenly we’re all misanthropes?

All indications are that we will continue down this path until and as Malthusian theory did actually posit, (as did Paul Eurlich and the Club of Rome) that, not so far off in the future, there will come a time when scarcities and pollution will leave a great deal of misery and suffering the world over. It will catch up to us. We’re already fighting illegal wars over dwindling oil deposits so the suffering, arguably, has begun. Still, Iraq pales in comparison with what some ecologists, economists and scientists predict. Remember the British economist Sir Nicholas Stern’s dire prognosis for the global economy if climate change is not addressed immediately?

So, from an environmental point of view it make good sense that we, with civility and rationality (while maintaining some scepticism but eliminating cynicism), roll up our sleeves and address some of the greatest challenges facing the planet today such as deforestation, climate change, the plunder of the seas, pollution and species extinction, and make logical and intelligent decisions through diplomatic and democratic processes to ease humanity’s ride, with a minimal amount of suffering as possible (that means economically too), through the 21st century. This is the environmentalism that I know and cling too.

Those to the far right wish to adopt the wait and see approach, or as they call it the: “fudge off you freaking pinko-commies” approach. Actually, I feel comfortable arguing that they’ve moved passed the head in the sand methodology and are now actively and aggressively engaged in trying to silence and belittle anyone who actually cares about the future condition this planet will inevitably arrive. And by doing so they are placing humanity in much greater peril.

And they complain that Environmentalists hate people?
Posted by Todd at 2:52 PM No comments:

OK, if you don´t believe me than maybe you´ll believe the Ranting Gryphon then? 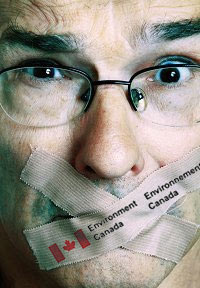 Environment Canada has "muzzled" its scientists, ordering them to refer all media queries to Ottawa where communications officers will help them respond with "approved lines."Well, where have we seen this before? I’ll remind you.

That’s right folks, if it looks familiar that’s because it was done a few years back, and south of the border. It is a tactic borrowed straight from the US Republican’s playbook “Why I hate scientists and how they interfere with my friend’s profits”. There actually WAS a book published on the subject called the Republican’s War on science, not that many have read it I imagine given the dearth of Britney Spear's anecdotes. Groan.

Here’s a 60 minutes piece talking about the Bush government’s successes at muzzling scientists. I urge everyone to watch this:

This is exactly what the conservative party is now doing in Canada, and everyone will be less informed as a result.

Ironically, the piece on 60 minutes ends with a mention that one of Bush’s science advisors Phil Cooney (who was the Chief of staff of the Council on environmental Quality and responsible for editing and burying scientific findings as well as ignoring scientist’s fears) is now working for (DRUM ROLE PLEASE) Exxon Mobile. Today, Exxon Mobile has posted the largest annual profit by any U.S. company EVER: that’s 41 BILLION dollars folks. Nice work for simply trashing the planet’s climate and lying to the public. Oh, what a wonderful world we have.
Posted by Todd at 6:46 AM No comments: