Changing an image will do little to change the reality. 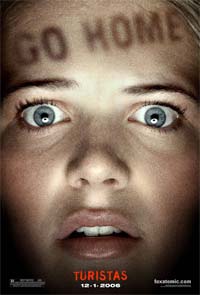 Now to begin, I’ve not seen John Stockwell’s newest horror flick “Turistas go home”(distribution by Fox Atomic - see the trailer). It was just released in the US on Friday, and was shred to sunders by critics the following day – a reaction one would expect for a trashy-teen-oriented slasher-film looking to cash in on the newest blood and guts genre which includes such contemporary classics (cough cough) as “Hostel” and “Saw”.

The film is set in Brazil (off the Rio beaten path to be exact) and after a night of cheap drinky-poos and getting “funky” with the locals, a group of young adventuresome American tourists awake the following day to find that they had all been drugged and robbed and are now left fending for themselves. Needless to say, this is just the beginning of their misadventures and they soon fall prey to a sinister doctor that makes his living in the illegal trade of human organs focusing primarily on Gringos (as revenge for first world meddling in Latin Countries). A must see you’re thinking?

Now, I normally wouldn’t waste time writing a film review, especially having not seen the film, however this is not a review but more of an interesting observation in regards to the reaction of the Brazilian Media, local commentators, and even of the local tourism authority to what most of us would dismiss as just another simple waste of celluloid.

The film has set off a firestorm of controversy in . Enraged Brazilian bloggers are on the digital-march, and there are even commentaries calling for “Bin Laden to wreak havoc on the again”; major dailies have jumped all over the story, and there are now calls for a boycott of the film in . Why? Because people believe the film distorts the image of Brazil and portrays it as a bit (cough) of a lawless nation. For anyone having spent any considerable amount of time in Brazil, such as myself, “falar mal do Brasil” (to speak ill of Brazil), or to even joke, is a “no-no” for gringos on par with “thou shall not have any other gods before me”.

The critique is that the film denigrates the true image of , one as being a peaceful beautiful country that embraces their tourists (this is PARTLY true), and that the repercussions of this film abroad could affect tourism here (this, is a bit of a stretch). Embratur (the Brazilian tourism association) and the vice-president of the Brazilan Hotel Industry Association have chimed in and are now looking to design campaigns aimed at North Americans to clean the up the country’s image.

However, the attack on this film is misdirected. And the image of abroad is not based on one film, but on the endless stories of violence, kidnappings and corruption that sadly plague this otherwise lovely nation. is considered one of the most violent countries on earth. Full stop. Comparisons are constantly made to nations at war by the UN. Gringos ARE in fact robbed and attacked in frequently, and just last week a group of 18 Brits where robbed leaving the airport by thieves wielding HANDGRANADES.

Months ago the PCC (First Command Capital in English) one of ’s largest and most organized criminal gangs closed down for DAYS. is the second largest city on earth.

The country is violent, and to turn the attention to and blame them for the country’s poor image abroad is pointless and rather childish.

A few years back the producers of the Simpson’s (Praise be Groening) created an episode of the popular American show entitled “Blame it on Lisa” and had the dysfunctional four-digit family head to Rio for a week of frivolity under a mission of finding Lisa’s NGO sponsored orphan. The family upon arrival is swarmed and robbed by children, Homer is kidnapped by a taxi driver and Bart is, well, swallowed by an Anaconda. It was cleverly done and I chuckled myself off the couch.

I laughed equally out loud when Simpson’s family visited my country of origin, the vapid donut consuming nation of . I considered it an honor that the mighty design tables of the Groening geniuses' inked an adventure outside of and focused on the Great White North, regardless of how silly or disturbingly accurate the stereotypes were.

However, Brazilians didn’t view the episode with as much humor or understanding. The tourism board threatened to sue Fox for financial damages the COMEDY may have caused the tourism industry. Many Brazilians were simply LIVID. It’s not that Brazilian aren’t a risible lot, more than able to role with the punches. Brazilians do spend endless hours berating their homeland, the politics and the way things function, or dare I say, don´t. Yet, it is not the role for outsiders (especially dem dang Merriiikans) to poke fun, or even pine in with an opinion.

On a final note, Brazilian films such as “City of God”, “Carandiru”, “The Redeemer” and the documentary “Bus (One of my favorite docos of all times btw) paint a far more violent image of Brazil than anything Hollywood or the Simpsons could conjure up; and all are praised as works of art here. City of (based on a true story) was nominated for 4 Oscars in 2004. Set in a favela (shanty town) in Rio de Janeiro the film (shot and edited wonderfully) is about one of the most violent stories you could imagine, where in the poorer hill-side dwellings murderers thrive, the police are all corrupt and there is little to no hope for a future. Again, a film based on real events.

Not all are up in arms about the film, and some are actually using the discussion to shed light on the grave problems facing some of ’s larger cities. On the GLOBO on-line website (one of ’s most respected news agencies) a current blog is underway about the film, and there are a number of individuals that are also perplexed to the nationalistic reaction. As one blogger from Rio De Janeiro put it: “I’m sure the film makes a couple of unfair assumptions about Brazilian culture, however, I bet the film is no where near as frightening than the current reality in this city. To clean up ’s image abroad, must clean up the country first.”