Life’s short, and sadly the good do die young.

Flávio Cannalonga
1953 - 2007
A colleague and friend of mine passed away yesterday after a struggle with cancer.

I first met Flávio Cannalonga (centre in photo) in 2002 when we headed off together for a one month expedition to the Deni Lands in the south of Amazonas state. He was the photographer; I was the videographer for Greenpeace. Apart from being one of the funniest individuals I have ever had the pleasure of working with, Flávio also proved to be genuinely kind-hearted and passionate.

We would later work together again in the Jaurucu River blockade in Para.

Last time we chatted was during the São Paulo theater launch of my documentary “Soy: In the name of Progre$$”. He surprised me in the audience and gave me a huge congratulatory hug. I always considered Flávio, apart from being a photographer, to be part illusionist, too. He would materialize out of nowhere. I recall him appearing out of nowhere again in Curitiba during the UN sponsored Convention on Biodiversity. Although you´d never know when he would appear, there would be no mistaking when he was around because the atmosphere always felt charged. 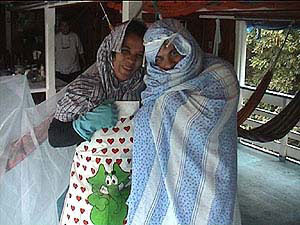 Flávio (right) dressed to avoid the Puins (nasty insects)
Flávio was a brilliant photographer who not only captured heart-warming moments in life through photography, but given his pleasantness, humility and humor, those lucky enough to have had the opportunity to meet and interact with Flávio will always posses heart-warming moments through memories.

Seems Britain is miffed at Canada regarding the Seal Hunt, and of course the black-hearted in the Great White North are pounding their chests while striking typical nationalistic poses in dismay. Why are they surprised?!

Well my fellow Timbit eating compatriots, it’s not just Britain. Just about every nation on the planet shakes their head in disgust whenever the seal hunt is raised in discussions.

“But Canadians are suppose to be so polite, how can they do something so barbaric” is the usual line I encounter when traveling or here in Brazil.

And I have to agree. Having seen first hand how sealers treat activists and fellow humans, it is no wonder they can, without hesitation, smash the skull of a 3 week old harp seal with a club. It’s just plain sick. Spare me the whole “well you eat meat or wear leather” school yard rebuttals. The seal hunt was built on vanity, and continues today because of sheer ignorance and cultural retardation.

Still, your average Canadian doesn’t stray any further than Disney land, or maybe a quick jaunt over the pond for a romantic week in Europe (just to appear cultured at beer fests) so encountering this type of dismay and disbelief from folks abroad is probably unfamiliar to most. Be rest assured Canuckies, no one understands this massacre and rightly so. Justify it to yourselves all you like, subsidize it, resize it, and romanticize it, you are fooling no one.

While on the subject of nations slaughtering defenseless animals, seems that the Japanese are at it again in the Antarctica Whale Sanctuary. But unlike the justifications Canadians use for the seal hunt “well, ahh, duhh, uhmm, dey ate up all da Cod” the Japanese say all 850 whales killed this year will be for “Scientific purposes”. You hear similar cries of “the world doesn’t understand us or our culture” from the Japanese too. Poor babies.

Well, at least the whale hunt is being hindered. The Sea Shepherd Conservation society is on the case, and the newest addition to their fleet, the “Robert Lorne Hunter” along with the “Farley Mowat” are out there given them hell! Read for yourselves!

And, Congrats to Bobbi for bringing this distant drama to the streets of TO.

Greenpeace too is headed out!

So lets hope with Greenpeace and the Sea Shepherd chasing these murderous thugs throughout the southern oceans, fewer exploding harpoons will be fired! I know folks on all ships, and I´m routing fer ya all! The courage it takes to do what these individuals do is incredible, the conditions they suffer unbareable, yet they all are committed to it to stop an unthinkable crime!

For more on the whale hunt here's a great little piece.. from the BBC

You are what you read 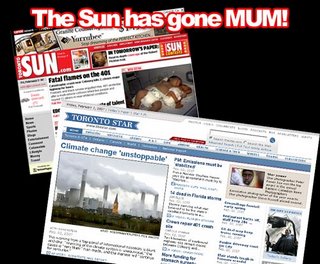 Well as the biggest climate change announcement this decade, and probably the most important this century, was made early morning in France it is interesting to note that every major daily (and I’m talking globally here) has picked up on the story with the exception of the TORONTO SUN which has decided that the birth of an overly large baby, a ground-hog predicting an early spring and a fatal car fire are more important.

No surprises here folks, the Sun has been on an anti climate change campaign since I can remember, and when you wonder where the army of neysayers in T.O get their marching orders, it’s tabloids like the SUN.
Posted by Todd at 12:22 PM No comments:

It´s in the report.

Well the IPCC report is out, and it is pretty damn conclusive, and scary. Here it is for all to read.

I imagine the Sun and it’s legion of frathouse readers will still rant and rail against the facts, but remember kiddies, specious reasoning and argumentative fallacies don’t work against world reknown scientists from NASA and the IPCC. 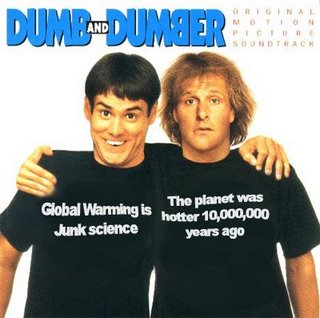 So all you naysayers, grab yourselves a beer, flick on pro wrestling and pray that with a growing intensity of storms the next tornado doesn’t flatten your trailer.

Al Gore gets the nod for nomination for the upcoming Nobel Peace Prize! It’s been argued that Gore’s film "An Inconvenient Truth" was the catalyst for the rapid growth in environmental concern regarding Global Warming. Being a media whore and an environmental documentary director myself (who has produced 3 documentaries on climate change over the last 10 years) I can’t help but feel a sense of pride that the medium of documentaries can be so powerful, and I happen to agree that Gore deserves the acclamations for his tireless work in raising the issue higher. However, it usually takes more than a single spark to fire up a movement. For decades environmentalists (Canadian Shelia Watt Coultier also gets the prestigious nomination), environmental groups and scientists have been warning us and pushing the issue of climate change foreword, against all odds and obstacles. But if the truth be told, it was Mother Nature that focused the hearts and minds of our planet to an issue in urgent need of resolve. Unusual heat waves in Europe, record droughts and floods in and intensifying storms the world over; sadly it was these disastrous events that forced the public to finally take notice.

By the way the DVD Portuguese version of “An Inconvenient Truth” will be distributed by Paramount Pictures in May and will be packaged with the documentary I produced last year with Greenpeace entitled “Changes in climate, changes in Lives” an one hour look into how climate change is already affecting Brazil.