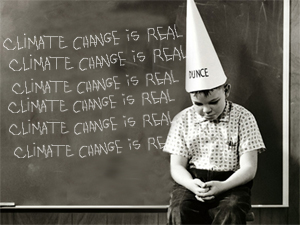 When it comes to trying to find absurdities in the Canadian Press about climate change, you can always count on Lorrie Goldstein to provide the fodder. I’m amiss as to why Lorrie (or the Sun) is so hell-bent on trying to dismiss climate change, or wriggle Canada out of its obligations under the Kyoto protocol when the global scientific evidence is so conclusive and our personal daily anecdotal experiences far too frightening.

Lorrie begins his most recent attack on climate change like this: “Let's assume that Al Gore and, in our country, Stephane Dion, Jack Layton, and (very recently) Stephen Harper and John Baird are right.”

Maybe Lorrie should actually try talking with some scientists for a change such as Stephen Hawking, John Lovelock and one of Canada’s brightest, David Suzuki. The debate Lorrie is not whether or not these people are “right”, the debate has moved on much further down the line and is much more urgent. Please catch up. Sadly, in some circles such as the insurance industry and in developing nations the discussion has moved on to “costs” and “adaptation”. But we know how the Sun feels about “3rd World Nations” (a pejorative term the Sun used recently in editorial warning Canadians not to travel to Mexico), so why should THEY be a concern, eh?

Of course to be fair Lorrie’s rant is not about tossing more doubt one of the most pressing issues to face our planet (finally). He posits “if it is real” then Nuclear Energy will be the planet’s savior. Well, nothing could be further from the truth. Although you will find some scientists in favour of promoting nuclear energy as THE clean alternative (surprisingly, Lovelock is a proponent), to date no one has created a safe method to transport and dispose of nuclear waste. We may narrowly dodge one bullet, but who is to say the next won’t find its mark?

Nuclear energy is also far too is costly both in terms of energy generation and as well in risk management. Don’t get me wrong, I think there should be some discussion in regards to what role nuclear energy could play alongside with other clean energy systems such as solar, wind, hydrogen and biomass, but try convincing the US of that when other nations around the world wish to build reactors. Iran anyone?

One final thing to keep in mind is that the nuclear industry is currently -- frantically -- SPINNING itself as the world’s sole solution to climate change. After decades of losing ground and loosing mountains of money, they see climate change as a marketing tool and have legions of communication specialists spoon-feeding scientific gibberish to easily manipulated journalists, so that they too may pen an article as factually incorrect as Lorrie’s.

What a load of spoon fed crock!

One a final note, while the Sun ponders whether “IF” climate change is “REAL” (although the subtle undercurrent to Lorrie’s editorial is that he is now falling in line, albeit reluctantly), today in the US, leading executives from some of the largest companies including but not limited too, BP (British Petroleum) America, DuPont, Caterpillar and General Electric are URGING George Bush to take serious measures in curbing CO2 gas emissions before it is too late. Yes, Lorrie, it is no longer just hippies and commie politicians that believe the sky is falling.
Posted by Todd at 4:29 AM No comments:

A bit of humor - and some news!

Well, looks like I´m not the only one to notice that a fair share of Canadians have turned a blind eye to the problems associated with climate change - here's a clever little sardonic take on the matter. For those self-exiled to the island of ignorance, the sarcasm in this piece will soar far too high over their heads for the humor to be of any value.

One a personal note, the latest documentary I produced with Greenpeace about climate change in Brazil will now be distributed by Paramount Pictures and accompany the Brazilian DVD launch of Al Gore’s “An Inconvenient Truth” in March. As well, over 500,000 high school text books will also be distributed next year with the DVD.
Posted by Todd at 2:58 AM No comments:

Well at least some get it... 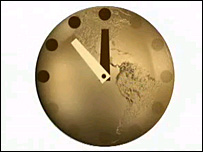 While the scientifically-challenged and cronically ill-informed among us debate whether or not world scientists are correct in their assessments over climate change, or ponder if leading global economists are actually "chicken little environmentalists", at least some in North America have their heads screwed on straight. Sadly, members of the FES (Flat Earth Society) will brush this off as another foofaraw. The alarm is ringing folks

From the BBC today 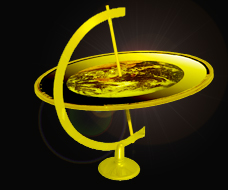 I’m always amazed at how some on this planet are well paid for keeping the already ill-informed perpetually ignorant. I’ve devised a new award for caustic coxcombs like this and or the organizations that harbor them: I call it the “Flat Earth Society Award" and it honors those -- like centuries ago -- that “refuse to accept the overwhelming and conclusive preponderance of scientific fact and continue to believe the easily refutable and absurd”. I give this first award to Lorrie Goldstein from the Sun, however given the recent vitriol attacks against environmentalists, and their best efforts to confuse and obfuscate the issue of global warming; maybe the entire paper merits this first prestigious honor.

Far be if for me to attack Goldstein’s article point for point. It is mostly conservative hyperbole and riddled with straw man attacks. Still:

“The Earth is 4.5 billion years old and has experienced many protracted periods of global warming and cooling that had nothing to do with human beings because we weren't yet alive.”

The scientific evidence is 90% CONCLUSIVE Lorrie. There is a global consensus (sure, there are a few rouge dissenting scientists) that since the industrial revolution the temperature has gone up (0.7 degrees Celsius) and has gone up in relation to the amount of CO2 placed into the troposphere (currently at 360 parts per million). There is nothing to argue here. You cannot discount anthropogenic influences, TODAY.

“Scientists say there have been near-extinctions of life on Earth five times because of climate change and other factors, the last one occurring about 65 million years ago.”

What concerns scientists (you know, those folks with two or three PhDs working at NASA?) politicians (Tony Blair?), economists (Sir Nicholas Stern anyone?) and yes, even those evil little dungaree wearing anti-capitalist eco-terrorists today is that it is not ONLY the planet that is vulnerable to slight perturbations in the global mean temperature.

Notably, it is always poorer nations or poorer populations within nations that have the most to loose. This is something often forgotten by the rabid right chiming in from their lofty upper-middle class towers in comfy . Heaven forbid you give a second thought to a local farming community in the south of .

Climate skeptics are like dogs. They sink their teeth into what ever soft and fluffy little doubts they dig up, and refuse to release them until you smack them on the nose with hard solid facts. Goldstein predictably uncovers and chomps down on the question of global cooling.

“While there is widespread agreement the world is going through a sustained period of warming, from the 1940s to the 1970s we experienced a period of global cooling, particularly in the Northern Hemisphere. Back then, Time, Newsweek and others ran stories predicting a possible new ice age. Oops.”

Uhmm, the whole global cooling phenomenon was based on one book and two or three papers submitted to science journals but more importantly, as I argued in a post awhile back, it was the MEDIA that got the conclusions wrong and or refused to read the scientific caveats. However, why let the facts get in the way of an editorial, eh?

There is simply NO comparison between global warming and global cooling. The body of evidence and the amount of research involved in “climate change” dwarfs what little effort was placed into the global cooling debate. As well, climate change has been an issue for longer that 20 years, and as each year passes the scientific certainty only solidifies. Comparing the two is simply childish, but expected from the scientifically challenged. For further reading: www.realclimate.org

“By the way, without greenhouse gases like water vapour and carbon dioxide, we'd all freeze to death.”

Straw man attacks are simply pathetic! We’d die of thirst without water too Lorrie, however I challenge you to live the rest of your life in a swimming pool.

Enjoy your award, Lorrie. Sadly, I know you´ll not be the last recipient.